Some 12th Century Animal Carvings and Their Sources in the Bestiaries


Prepared for this, the hunter casts down before her a ball of glass. In this she sees herself reflected in miniature, and, believing it to be the cub, pauses: discovering the trick, she resumes her pursuit: the hunter throws down another ball, and repeats the process until he has gained a place of safety, or the tigress is tired out.

Ambrose seems to be responsible for this though he did not invent it. It is one of the subjects to be found in your cathedral. Naturally I am not going through the whole book. I shall but take a subject here and there, being guided by the order of the text. Here, for instance, is the Griffin, of which we read that it is a winged animal that lives in the mountains beyond the North and resembles the lion in body and the eagle in the head.

It can carry off a horse. The Elephant follows, and of him much is said in a mixture of fact and fable. In a Cambridge manuscript you see him with his howdah and what the Book of Maccabees calls the Indian that rules him. In a little French picture you see two elephants at the pairing season taking refuge in the water and so eluding the dragon, which is their inveterate enemy.

This is fable, but I would not have you think that we were completely ignorant of what the elephant was really like. 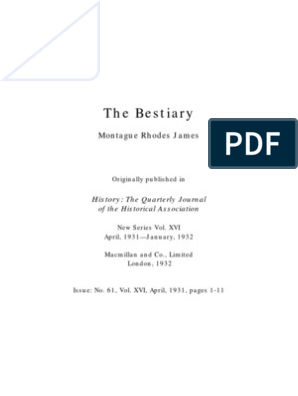 In St. Louis of France made a present of a live one to Henry III of England, and Matthew Paris, our great historian of that time, made a couple of drawings of this elephant from life, and he was really a very capable and faithful artist. Then I have the Crocodileincredibly unlike. In the Cambridge MS. But the crocodile has troubles of his own, illustrated in a French picture. There is a beast called a Hydrus which enters his mouth when he is asleep and eats his way through him with fatal results.

Another Cambridge MS. In the upper scene the dog, whose master has been beheaded, starves himself to death beside the corpse; while below you see how, when King Lysimachus was burnt, his faithful dog leapt into the flames and perished with him.


Only it was in fact the corpse of Lysimachus and the funeral pyre that were in question: the artist was unfamiliar with cremation. Of reptiles I show you the Basilisk, from the latest of all my copies. Though the text does not say so, the artist evidently had in mind the story that he was hatched out of an egg laid by an old cook. His concentrated venom is such that he kills man, beast, or bird at sight, without contact.

Some state that the best weapon against him was a looking-glass, since his reflection was fatal to himself. I cannot help thinking what a deal of pleasure some of us would lose if that were the universal rule. But others, and among them the Bestiary, held that the weasel could always get the better of him. The adder stopping her ears is shown in the French MS. The figure on the right should by rights be an enchanter to whose spell the beast refuses to listen. It is, in fact, a man casting his money into the sea, because those who are immersed in the cares of this world are like the deaf adder, while he who resigns all earthly possession can listen to the heavenly voice.

This is a perversion of the original picture. Last of my Bestiary pictures is another admirable drawing from one of the Cambridge copies, representing the monstrous fish known as the Aspidochelone: so large and sluggish that it remains stationary for years with its back above water, until bushes grow on it and it is mistaken for an island. Mariners moor their ship to it and light a fire, and when it feels the heat it plunges to the sea bottom and takes ship and all with it. You meet this fish in the story of Sindbad the Sailor; you meet him also in the voyage of St. Brandan, where he has a proper name of his own, Jasconius.

He encircles the whole world, and his object in life there is to put his tail into his mouth, but this he finds difficult of accomplishment, and earthquakes and storms result from his efforts. In the Bestiary he furnishes a valuable moral lesson, being compared to the Devil. Those who are ignorant of the Devils wiles put confidence in him and bind themselves to him by their works, and with him are plunged into hell fire.

This is one of the tales which the Bestiary has taken over from Physiologus, so it goes back a long way. After going through the categories of beasts, birds, reptiles, and fish the Bestiary tails off into a disquisition upon trees, and.

But these are comparatively dull. I shall return to the Bestiary in order to hang on to it the second part of my lecture; but first I shall say a word about some other books which treated of Natural History on a more comprehensive scale.

Late in the twelfth century Alexander Neckam of St. Albans wrote on the Nature of Things; in the first half of the thirteenth Vincentcommonly called Vincent of Beauvaiscompiled the greatest of all medieval encyclopdias, in four bulky divisions, the Speculum, or Mirror of Morals, Doctrine, Nature, and History.

And in the fourteenth Bartholomew the Englishman wrote of the Properties of Things, an enormous book which was known to the Elizabethans in the English version of one Stephen Batman; Batman upon Bartholomew is an authority often cited by commentators on Shakespeare. Some of these compilers indulge in stories about the sagacity of animals which remind us of the columns of the Spectator a generation ago, or even of the Points from Letters in The Times of the present day. I am tempted to cite two.

Vincent in his Mirror of Nature tells of an animal called an enitra, which I suppose to be a marmot of some kind. It lives, says he, in pairs, in Germany. The pair construct a nest in a hillock with a store-place for food in the winter. The male is by nature parsimonious, the female greedy. On this account the male stops up the entrance to the larder, that his wife may not get at the food.


She, however, full of guile, makes a secret entrance at the back of the mound and steals as much as she desires. The consequence is that at the end of winter the husband is reduced to skin and bone, while the wife positively shines with fatness. No moral lesson is drawn from this by Vincent; but surely some of us have observed in the circle of our acquaintance married couples to whom it might fitly be applied.

Alexander Neckam, again, has a story of the artfulness of the parrot. You may recollect that in his lamentation over Saul and Jonathan, David said, Ye mountains of Gilboa, let there be no dew upon you, and what follows. There is in consequence no dew nor rain upon those hills, and parrots, which are susceptible to damp, breed there in large numbers. Now a knight in Britain had a parrot, a great favourite of the family, for many years, and this knight went on crusade, and, like the Amalekite, happening by chance upon Mount Gilboa, he saw there a parrot which strongly reminded him of his ownso much so that he said to it, Our parrot, which is just like you, in his cage at home, sends.

No sooner had he uttered these words than the strange parrot fell to the ground, to all appearance dead. The knight was a good deal surprised, and when he returned home, told his family the incident, in the presence of his own parrot, which listened attentively to the story, and when the climax was reached uttered a loud cry and fell overagain to all appearance lifeless.

Great was the lamentation of the family: they took the bird out of the cage and laid it down in the open air on the chance of its recovery. To their horror and discomfiture the parrot instantly spread its wings and flew off, presumably to rejoin its companion on Mount Gilboa.

The whole thing had been a put-up job, exactly how contrived it is not for me to guess. But no one, I am sure, who has observed the depths of guile that lurk in a parrots eye can refuse credence to this anecdote.

The hotch-potch of unscientific Natural History which fills these large tomes and others which I have not time to mention was destined to be replaced by better material as time went on. Even the men of the later Middle Ages could not put up with the Bestiary: as I have said, I only know of one copy as late as the fifteenth century. But the process of replacement and the evolution of modern views of nature were very gradual, and it is surprising to see to how late a date some of the old beliefs hang on. I intercalate here a picture or two from a book of the sixteenth century written by a very industrious naturalist, Aldrovandus , most of whose pictures are accurate enough.

Yet he thought it not unreasonable to set these things before his readers. First we have three wonders of the deep: the sea pig with several supplementary eyes, the monk fish of possiblyamiable nature, and the bishop fish certainly not. We then have two land-raritiesI hope, rarities.

The first an eightlegged and crowned cockatrice or basiliskcockatrice, you must know, is the same word as crocodile, though the medieval people did not so treat it. The second is a variety, I suppose, of the tortoise: it has twelve legs, at least four eyes and four ears, and must, one would think, have spent most of its time debating which way to go. I think that perhaps the Encyclopdia Britannica is justified in saying that Aldrovandus was totally destitute of the critical faculty.

Then we switch back to the Bestiary, only to take a fresh start and survey a somewhat different province. Several copies of the Bestiary in one of its various forms begin with a section about the curious races of people who dwell in the remoter parts.